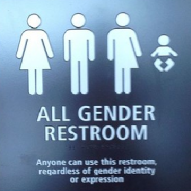 Well we’ve all been hearing about transgenders being allowed to now use the rest room of their choice.  Initially I was just as upset as everyone else. Outraged even. But then I had someone ask me a question. He said – Do you think this is new? Transgenders have already been using the rest rooms of their choice. I felt like Tony DiNozzo after Gibbs smacks him in the head. Of course we have already been sharing the bath rooms with transgenders.  It’s not new. What is new are the laws that are being passed making such a big deal of it that it has caused the outrage we are seeing. I do have to wonder what is the real purpose for making this such an issue now?

As I said, we have already been using restrooms with transgenders. It’s not the fully transgender or even the transitioning transgender that I am concerned with. They see themselves as they are – which is whatever sex they want to be. So if there is a transgender female in the rest room I am no more threatened by them than I am of a lesbian sharing the rest room with me. What I am concerned with are the impostors. The perverts who want to take advantage of the new law and abuse it. That has already happened. What this law has done was not further the rights of a transgender but has caused woman and children (male and female) to be unsafe using a rest room. Let’s take for example the Pennsylvania man who was arrested for allegedly invading the women’s bathroom. According to Snopes this man’s arrest was not related to the new law, his crime was in taking pictures of a minor, which he has been charged with.  But this is splitting hairs. If the law did not allow him to enter the woman’s bathroom then he would not have been in there to take pictures. It is this type of reasoning that will cause us to continue to be faced with the unlawful acts and not solutions. So let’s not keep making excuses but let us begin to acknowledge the main cause of this issue.

We can not have a law that is so loose that it puts people at risk including the transgenders. If anyone can wake up and decide “well today I think I feel like a woman” and wear women’s clothing, that does not make them a woman anymore than my wearing jeans and boots will make me a cowboy. The clothing alone should not dictate which bathroom you use. They are cross dressers, and some still prefer the opposite sex and would never consider transitioning and surgically changing their genital. When I see the male transgenders who have obviously been on hormone therapy and clearly looks male I have to ask myself who are they kidding by trying to take issue with this law? No one is going to do a genital check before they head into the men’s rest room so how are you going to be forced to use the rest room that matches your genitals? You can’t be, so you really have no argument. This would also apply to the female transgender. Who is going to question you when you go into a stall? No one.

The transgenders want to blame the Republicans for trying to force them to use the rest room that matches the sex they were at birth. Well as I said earlier, who can make you do that without going through a genitalia check first – no one can force you to do that. That law is not for the fully transitioned transgender or the transgender in process. It is to reduce the risk of just any man walking into the woman’s rest room claiming to be female. The recent incidents have already justified our need for a law that helps to better clarify who can and who can not use which bathroom. Now the Democrats who have claimed for years that it’s the Republican’s that have this so called war on woman have only proved they are the real culprits. It’s the Democrats that are pushing for anyone claiming to identify as male or female without any qualifiers to use the rest room of their choice. This has clearly set woman and children at risk. So who is it that really has the war on woman?

4 thoughts on “What About the Transgender?”